[Annoyingly, my notes from sol 1 are incomplete, so I had to reconstruct much of this sol from memory. Sorry about that. After this, I got a lot more disciplined about writing up my notes promptly.]

I arrive at JPL at 18:30 and head straight to the SMSA[1]. Ashitey Trebi-Ollennu, the Mobility/IDD[2] guy on shift, tells me he needs a couple of Perl scripts to manipulate simulation data that comes out of RSVP[3]. I can write the scripts in my head faster than he can tell me what he needs, so I sit down at the keyboard and start hacking.

By the time I look up again, it's nearly two hours later. Spirit will be landing in a few minutes. How does this happen?

No time to worry about it now. Justin Maki has a monitor clocking off the upcoming events, and I keep trying to look at that and the TV showing the CMSA[4] at the same time. 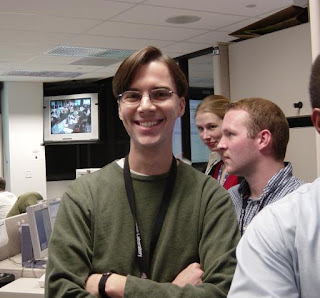 Me, enjoying the moment.


Or, at least, I do until Jennifer Trosper kicks me out of the SMSA -- me, and several other people. Jennifer's the flight director, and it's part of her job to make sure the room's manageable. So I get why she does this, but I'm bitter about it just the same. I don't see much in the way of rhyme or reason to who gets kicked out and who gets to stay, and if it's an arbitrary line, I know which side I want to be on. Still, there's not much I can do about it; I wander around for a minute until I find a room full of friendly scientists, and I invite myself in. I hover over Tim Parker's shoulder and watch a data display as Spirit hurtles toward the red planet.

And that's where I'm standing as Wayne Lee clocks us through Spirit's entry, descent, and landing process. The truth is, we're all just spectators at this point; light-time delays mean we can't react in time to make a difference even if we see something wrong. By the time Earth receives the signal that Spirit has hit the top of the Martian atmosphere, Spirit's already down. One way or another.

That doesn't take away from the drama of it, though, not one bit. And Spirit, as it turns out, plays the drama for all it's worth. The room explodes with cheers when we get the first indication that she's landed -- and then she goes silent. Years later -- okay, it's just minutes -- she says hello again, and this time the pandemonium in the science room makes the earlier outburst look like a tea party.

So Spirit's a drama queen. But we have a rover safely on the surface of Mars. I'm in the mood to forgive.

Once we've had a little time to chew on the data, it's press conference time. Only a few people are up on the stage, but practically the entire MER team troops over to von Karman auditorium, just to glory in the moment. A line of MERfolk forms in front of Elachi and Theisinger[5], high-fiving as they stream by. I take a seat with Nagin Cox and Jeff Biesiadecki and just grin hugely as the folks on stage read short prepared statements and then answer the reporters' questions as best they can.

Looking around the room as the press conference proceeds, I'm struck by something -- a sense of scale. I'm a small, small part of a huge, huge mission. Hundreds upon hundreds of JPLers have worked on this project, along with others around the world. Slaving away in my office for years, I never really got a sense of the scope of this team. Mechanical and electrical engineers, flight and ground software developers, testers, navigators, machine vision experts, hundreds of top-notch people doing the best work of their lives. And it all had to go perfectly to make this moment happen.

I switch my attention back to the press conference to hear Jennifer Trosper fielding a question about the airbag that didn't deflate. Right where we'd hoped to drive Spirit off the lander, there's an airbag that didn't retract fully -- perhaps caught on something. The reporter's asking how big the obstacle is, and Jennifer doesn't know -- but it just so happens that Brian Cooper and I looked at that in RSVP, right before coming over to the press conference, and we made a preliminary measurement. I manage to tell her, more or less sotto voce, and she relays the answer to the reporter: "75 or 80 cm." 
I call my dad and stepmom, and my in-laws, on my cell phone, just to share the moment. My dad, in particular, grew up dreaming of space travel, listening to any science fiction radio program they broadcast in Ohio when he was a boy. You'll have to work pretty hard to find a prouder father in this solar system right now.

By the time I go home, I've been up ... uh ... I don't even know how many hours. There's no word to describe how I'm feeling, so I make one up. Exhilarausted.

[1] Surface Mission Support Area. It's the nerve center of the surface mission.

[2] Instrument Deployment Device, the official name for the rover's robotic arm. Why they couldn't have called it "ARM" is beyond me. Ashitey's job is to keep an eye on the health of the IDD and also of the rover's mobility system -- the wheels, suspension, and associated hardware and software.

[4] Cruise Mission Support Area. It's where the folks who are flying the rovers to Mars sit. When the rovers land, they hand over to the SMSA for good.