Today we're continuing the pre-conjunction IDD activity to execute during conjunction. In one of those wonderful happy-fun-time events, there are two RAT targets -- and neither of them really works, thanks in part to wonky data in the terrain mesh caused by shadowing. We end up taking another image of the currently shadowed area, with modified image parameters that we hope will improve range data, and in the meantime we do what we can with what we have.

That turns out to be a huge pain. When at last we get something that seems to be working, we run into a joint limit on the APXS and have to start looking around for alternatives. But the alternatives that are RATtable have even worse problems, so we go back to the first target. Eventually we tweak the normal so that we can place all instruments there, but the tweaked version can't handle more than about a 10N preload from the RAT. That's not nearly enough to brush, to say nothing of grinding -- we need 40N or so. So we keep working on it ....

Eventually, we end up with a two-pronged strategy. Prong one is to choose a target in the shadowed area, despite the poor range data there. Prong two is to cross our fingers.

For the first time in a long time, there's a press conference playing on the TV behind us as we work. It's them science guys, talking about Victoria Crater. One of the images they show illustrates the scale of the crater -- they show the Rose Bowl fitting into it, with room to spare.

Wow. I see why the science team wants to stay here a while. So much to see!

[This is where we had to take a few weeks' break for solar conjunction: a giant flaming ball of gas (no, not Rush Limbaugh, the sun) interposed itself betwixt us and our beloved rovers. That made radio communication impossible for a while and thus interrupted normal planning. Next post: sol 1007, November 2.] 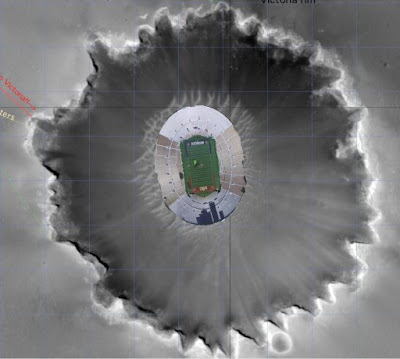 Courtesy NASA/JPL-Caltech. Victoria Crater swallows the Rose Bowl.
Posted by Scott Maxwell at 20:55 No comments: Links to this post

The drive went great. Today's all about the IDD: MI, RAT-brush, MI, APXS on the first sol; then RAT-grind, MI, and APXS again on the second sol. Courtesy NASA/JPL-Caltech. Perfect driving put this patch of rock dead in front of us, right where we wanted it. RPs, one million; Mars, zero.
Posted by Scott Maxwell at 20:15 No comments: Links to this post

The drive went beautifully, or so we think. We got a nice PCAM of the slab of rock we're targeting, just 6m away. The bad news is that we didn't get the HAZCAMs for some reason. One of the other RPs floats the idea of driving even without them, prompting Steve to tease, "Are the PIs more conservative than the RPs now?" But, I say, "Nope: we don't drive without the HAZCAMs."

Steve agrees. "We drove aggressively so that we would have a margin day. Let's use it."

That becomes the default plan. But it gets under my skin. We worked hard on yestersol's drive, and it worked, damn it. I hate being stymied by something like this. So I go down to MDOT and ask them what happened to our data. Sometimes it didn't make it to the spacecraft for one reason or another, but sometimes it's just a ground processing problem of some description -- a server needs to be restarted, or something. It's worth asking, especially since I won't have anything else to do if the HAZCAMs are truly missing.

The answer from MDOT is that the data made it from Opportunity to Odyssey (our relay orbiter), but they're not sure yet what happened to it from there. It's either still on Odyssey, in which case we won't get it until tomorrow, or it's in the Odyssey TDS (the telemetry data server), in which case they might be able to figure out what's wrong and get it unstuck.

This is actually pretty good news, as far as it goes, so I take that back upstairs with me. "Change of plans," I say. "Let's plan as if there's going to be a drive. If there isn't, we'll pull it and just do remote sensing."

Then I turn to the RPs. "While we're waiting on the word from MDOT, let's see what we can do without those HAZCAMs. The burden of proof has to be on those who want to drive: we'll have to prove it's OK to drive without them. But let's bring every piece of data we have to bear on that. We've done it before, but we know we'll have to have a wider discussion -- especially since we're so close to the rim -- and we should have a case to make when that happens." They swing into action.

And it turns out it's a good thing. For some reason I don't quite get straight, we lost our uplink pass tomorrow, so today is our last day to bump before conjunction. (Well, we have one more day if we absolutely need it, but we really don't want to spend that one if we don't absolutely have to, since we're not sure exactly when we lose contact with the rovers, and we want to get some IDD work in first so that we can start a long integration over conjunction.)

And then we get the word from MDOT. They found our HAZCAMs! They've been here on Earth the whole time. They've restarted the server and we should get the data in about 20 minutes.

The good news is that when the images pop out of the server, they show nothing alarming. Just as we expected -- and we can drive! The bad news is that more data pops out at the same time, and it shows an unexpectedly high current draw on the RF wheel. No telling why, and we decide there's not much we can do about it. We're driving.

The actual sequencing isn't my concern, for the most part. I'm not on shift today, just hanging out to keep an eye on things for this near-rim drive. (Ah, the responsibilities of being a lead RP!) But it's a straightforward one, appropriately simple: we drive up to a rock target ("Fogo"), bump onto it to scuff it, and then back down a bit so that we can see the scuff and IDD the rock.

(This mini-story doesn't fit anywhere, but it's a classic. While we're chatting about the sequence, my cell phone rings, playing a Smiths song, and Matt Heverly grins at me. "You're the only adult I know who has that many ring tones," he quips. "You should be a junior high kid.")

Speaking of data coming down during the process ... while we're looking at the drive during the APAM, Squyres pipes up with an interesting question. "Hey, we just got the HiRISE image of Opportunity at Victoria Crater," he announces. This is the high-resolution MRO image we've been eagerly anticipating. "Would it improve the tactical planning process if I --"

"Yes!" I declare without even thinking about it.

I really am on fire.

A few moments later, we're looking at Opportunity, as seen from orbit. She's sitting there, perched on Cape Verde -- just a few pixels across, and most of that mast shadow, but it's undeniably our baby. This is astonishing. It makes her real all over again. I can't even find the words.

We're going to take good care of her.

Our sequence is appropriately cautious, sporting all the bells and whistles that it should for something that takes us so close to the rim. And it helps that we're going uphill to the rim from here, so if we slip at all, it will be in the safe direction, away from the edge. But everybody's nervous about it anyway. As Matt Heverly leaves, he sums up the feeling: "Well," he says, "see you at the Congressional Anomaly Review Meeting!" Courtesy NASA/JPL-Caltech/University of Arizona/Cornell/Ohio State University. Steve sent us a black-and-white preview of this glorious HiRISE (MRO) image showing, unbelievably, Opportunity from orbit. Click through for the full, spectacular image, available in both annotated and unannotated versions.
Posted by Scott Maxwell at 19:35 2 comments: Links to this post

"Have you see Mark Maimone yet?" Matt Heverly asks me as I walk into the sequencing room. "He's kind of freaking out."

And he's overreacting. The drive went just about exactly as planned, leaving us poised near the rim with a beautiful view out onto Cape Verde. It's the "near the rim" part that Mark was apparently freaking out about. By the time I find him, he's calmed down, admitting that he'd misread part of the uplink report.

So if he's happy, I'm happy. Matt and I go off and plan thisol's drive, one that will take us 20m out onto Cape Verde. If this one goes well, it'll leave us set up for the final bump to our pre-conjunction imaging position. And nobody will be freaking out. Courtesy NASA/JPL-Caltech. Peeking over the rim of Cape Verde into the interior of Victoria Crater.
Posted by Scott Maxwell at 18:56 No comments: Links to this post

So all we have to do is approach Cape Verde. It would help if we knew where it was: we have dueling localization estimates, and in the end we take our best guess.

Thanks to the recent flight software upload, we're nervous about using our usual waypoint commands anywhere near the crater. So we sequence a 40m shot at Cape Verde, using lower-level driving and reinforcing turns every 5m. The last 5m uses guarded motion -- it will autonomously stop if it detects a hazard, such as a cliff edge -- but otherwise there's nothing fancy.

It's gonna be a hell of a view. Victoria Crater is an awesome place, well worth the slog it took to get here.

Since we're shooting toward the crater rim, we decide to put in a few keepout zones to make doubly (actually, triply) sure we don't go in. Since circles are the easiest kind of keepout zone to specify, we put a big circle directly in our path, and two smaller ones off to the sides. I take a look from the overhead view in RSVP ... then adjust the two smaller circles slightly, and it's perfect: the Mickey Zone of Death. 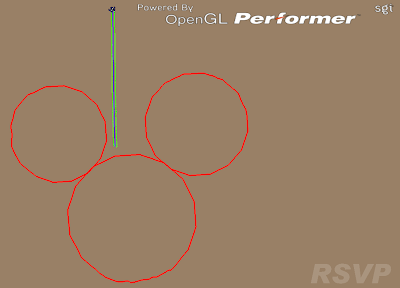 The Mickey Zone of Death!
Posted by Scott Maxwell at 18:16 No comments: Links to this post