Ah, I got 8 solid hours of sleep. While getting ready, I listen to the radio, and the newsman says that there's no news from Beagle 2. Today was their last good chance, though they'll keep trying until next month. As silly as this gesture might be, I turn off the radio and observe a minute of silence. Best of luck with Beagle 3.

I actually slept long enough to be late for the science meeting (again), but I don't care. Whoever invented sleep is my hero.

No new MTES data today because of the ongoing airbag retraction activities. (Which will continue: we keep seeing retraction, but not as much as we're hoping for. The current plan for tomorrow is just to retract that sucker as far as the motors can make it go, then start standing up anyway.) But there are new PANCAM images, which are displayed on the projection screens as I walk in. It strikes me that Jim Bell is as laid back as a person can be without being actually dead. If I were in his position, getting this fantastic data every day, I'd be jumping up and down like a maniac. We have taken a full 360-degree PANCAM panorama, though some of that still awaits downlink. Success!

They've done some spectral analysis on the rocks. There's a higher rock abundance in the distance and on the hills, which you can't detect visually, but it becomes obvious when they show the spectral data in false color. They crank the data until the soil is red and the rocks are green -- using shades of red and green that wouldn't look out of place on a stop light -- and you can see green swaths in the distance that spell rock fields. 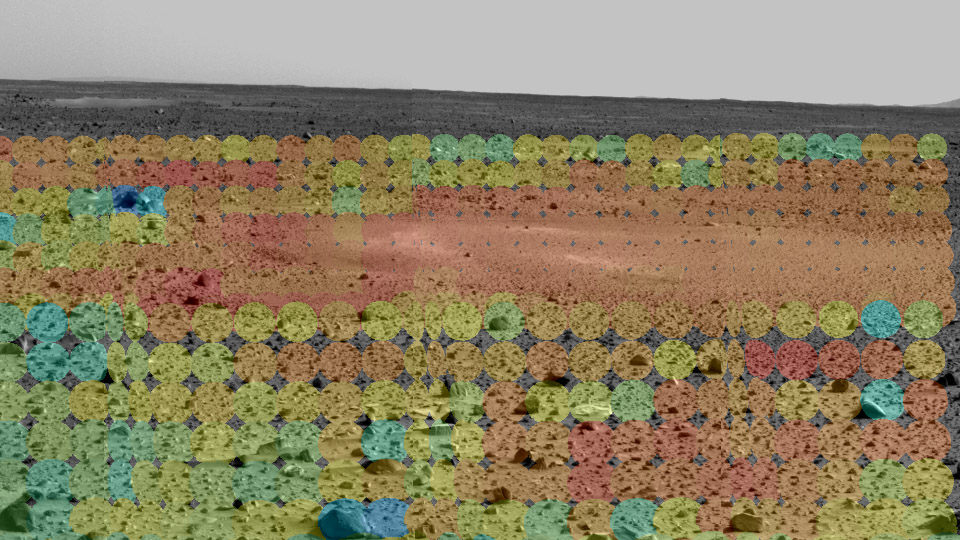 
Matt Golombek has happy news about the remote sensing data. The data we're taking locally at the landing site confirms the orbital data, which is a good deal because it means we can trust orbital data when selecting future landing sites. (And also because it means the orbital science results are trustworthy, come to think of it.) Rock abundance, TES albedo vs. thermal inertia (giving a rock-to-dust ratio), slope, radar measurements of surface solidity (important if we're going to drive on it), etc., all look good.

Atmospheric science is up next. They used the MGS TES[1] to monitor the atmosphere over Gusev pre-EDL[2], so that the EDL team would know what to expect during Spirit's landing. The predicted temperature and density info from TES was validated by the EDL team -- that is, what we saw during the landing was what we were told to expect. That's good news for Opportunity. And so is this: the dust storm at Meridiani is clearing, the temperature is dropping, and the tau (atmospheric opacity -- in LA we'd call it "smog," on Mars it's caused by atmospheric dust) is decreasing. (Thanks to the passing storm, the atmosphere at Meridiani[3] is 0.5 opaque in the infrared, probably completely opaque in visible light. If you were standing there, you'd be dust-blind.) The EDL team analyzing Spirit's landing data is concerned about Spirit's somewhat late parachute deployment; the orbital TES data may help them refine the parameters for Opportunity's landing, if they need to.

MTES, despite being one of the two groups (the other being PANCAM) that can get useful data while we're still on the lander, is also increasingly eager to drive. They want pictures of bigger rocks, ideally something that would fill their field of view, because that gets them a lot more interesting data. Nobody else has much to say, and the meeting breaks up. They'll reconvene at 14:00 LST tomorrow.

I noticed that Frank [Hartman] and Brian [Cooper] weren't in the science meeting, which means we must have some cool new 3-D data. I go to the Sequencing MSA and see that I'm right. Frank and Brian (and Jeff Biesiadecki) are at the two RP[4] workstations, wearing 3-D goggles. These aren't the cheap cardboard (or five-dollar plastic) glasses we use to view anaglyphs, these are expensive, battery-powered, LCD shutter-based gadgets we can use to see true stereo displayed by our software. I grab a handy pair of the goggles and sit down for a look. 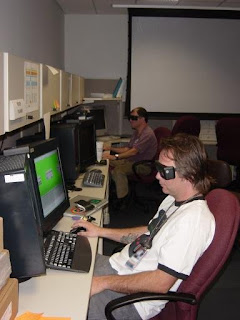 
Our software is so cool.

In this case, when I say "our" software, I mean "their" software -- that is, HyperDrive, the half of RSVP that was built by Brian, Frank, Jeng [Yen], and John [Wright]. My half of RSVP, RoSE, is excellent work, if I do say so myself. But HyperDrive is the part of RSVP that CNN will point the camera at, the part that does real-time 3-D visualization of the rover in the Martian terrain. Brian and Frank have loaded up the latest terrain meshes built from the fantastic data we were getting yesterday and are driving the simulated rover through it. The modeled rover articulates realistically as it drives across the terrain: you can see the rover climbing across rocks in the image data, its six-wheeled rocker-bogie suspension hardly breaking a sweat. In one case, a rock blends into the background so well that I notice it only when the rover wheel lifts up to drive over it, so the software can see the terrain better than I can.

We have a great programming team, now we just need a marketing department and we're set for life.

Brian also shows me a new PANCAM image of the airbag we originally thought might be a rock. It's now indisputably an airbag; you can clearly see the wrinkles in the fabric and the lighter airbag material peeking out from underneath the dust we accumulated during the landing. It's still not clear why it's settled into the particular bent shape that it now has, but there's no longer any thought that we're looking at a rock surface.

Brian has dressed up a little because he's doing another interview later in the day. I still haven't been called about doing media, so Brian suggests that I walk over to von Karman, where the press are camped out, and ask if anyone wants to interview a rover driver. He doesn't put it exactly like that, but when I think of it in those terms, it sounds a little pathetic, so I don't think I'll do it. I'm not itching to do interviews for their own sake, anyway, and the world does not need to see my face on their TVs. I do want to try it, to see what it's like. It might be fun. Or it might go horrendously wrong and bring shame upon NASA, eventually spelling the end of a once-proud space agency.

Instead, I spend some time catching up on BS work instead -- sending a draft conference presentation to Document Review, clearing out my email, stuff like that. And setting up a couple of mailing lists we should have established a long time ago. And flipping through the new PANCAM images. And waiting for my chance to drive.

[1] That is, the Thermal Emissions Spectrometer instrument aboard the Mars Global Surveyor spacecraft. Like the Mini-TES (MTES) aboard our rovers, it looks at the heat coming off of stuff and we can figure out what the stuff is made of.

[2] Entry, Descent, and Landing -- everything from the top of the atmosphere to a safe landing on the surface.

[3] Meridiani Planum, where Opportunity will land.

[4] Rover Planner. It's the official name of the rover driver job; they called it that so that not everyone on Lab would know what it meant and try to get the job. I think I'm kidding about that, but I'm not sure.
Posted by Scott Maxwell at 00:09